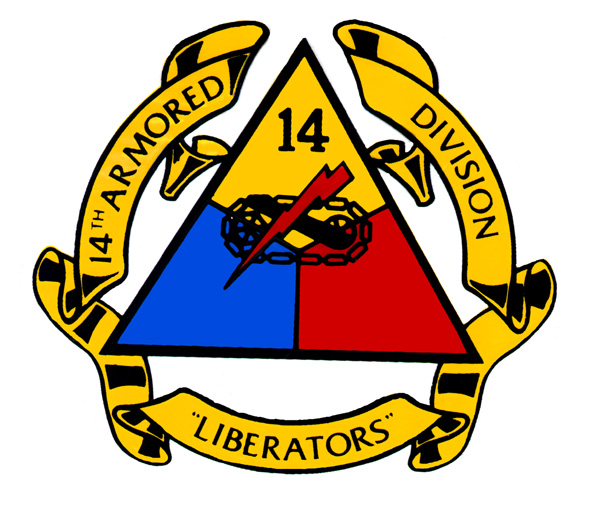 On 20 July 2010 the U.S. House of Representatives passed H. Res. 1483 honoring the 14th Armored Division and its men for their accomplishments during World War II.

Whereas the 14th Armored Division was activated on November 15, 1942, at Camp Chaffee, Arkansas, as a unit of the United States Army;

Whereas the Division's 19th, 62d, and 68th Armored Infantry Battalions traced their lineage back to the 62d Infantry Regiment, which was organized in 1917;

Whereas the Division landed in southern France on October 29, 1944, and first entered combat on November 20, 1944;

Whereas the Division participated in the Rhineland, Ardennes-Alsace, and Central Europe campaigns;

Whereas the Division participated in the liberation of most of the French province of Alsace in late November, 1944, and was engaged in an offensive against the Siegfried Line itself when, on December 19, General Dwight D. Eisenhower ordered the 7th Army to withdraw from Germany in response to the serious threat posed by a major German offensive in the Ardennes;

Whereas when the German army launched Operation Nordwind, the last major German offensive of the European war, against 7th Army positions, elements of the Division engaged several German divisions between January 1 and January 7, 1945, contributing materially to deflecting the initial German attacks;

Whereas it was during one of these engagements on January 3 and 4, 1945, that the Division's Private First Class George B. Turner earned the Medal of Honor for his heroic actions in helping to repel repeated German attacks at Philippsbourg,France;

Whereas, on January 9, 1945, the Division stopped the German XXXIX Panzer Corps from breaking through the 7th Army's lines at the villages of Hatten and Rittershoffen;

Whereas elements of the Division were awarded two Presidential Unit Citations;

Whereas, on March 24, 1945, after days of heavy fighting, the Division broke through the Siegfried Line and advanced to the Rhine River;

Whereas, after crossing the Rhine River, the Division liberated Stalag XIII-C and Oflag XIII-B, two large prisoner of war camps at Hammelburg, Germany;

Whereas, during April 1945, the Division rapidly advanced hundreds of miles across southern Germany, fighting numerous battles before crossing the Danube River north of Munich;

Whereas, on April 29, 1945, the Division, after a fierce engagement with several thousand SS troops, liberated Stalag VII-A, one of the largest prisoner of war camps in Germany;

Whereas the Division is designated a `Liberating Unit' by the United States Holocaust Memorial Museum in recognition of its liberation of civilians of many nationalities and ethnicities from forced labor and concentration camps, including several large sub-camps of the notorious Dachau concentration camp system;

Whereas the Secretary of the Army awarded the Division the distinctive unit designation, `Liberators', in recognition of the Division's role in liberating large numbers of US and Allied prisoners of war; and

Whereas the proud fighting tradition and accomplishments of the Division and its men, especially those who made the ultimate sacrifice, must not be forgotten: Now, therefore, be it

Resolved, That the House of Representatives recognizes the exemplary service and sacrifice of the soldiers of the 14th Armored Division of the United States Army, known as the Liberators, during World War II.